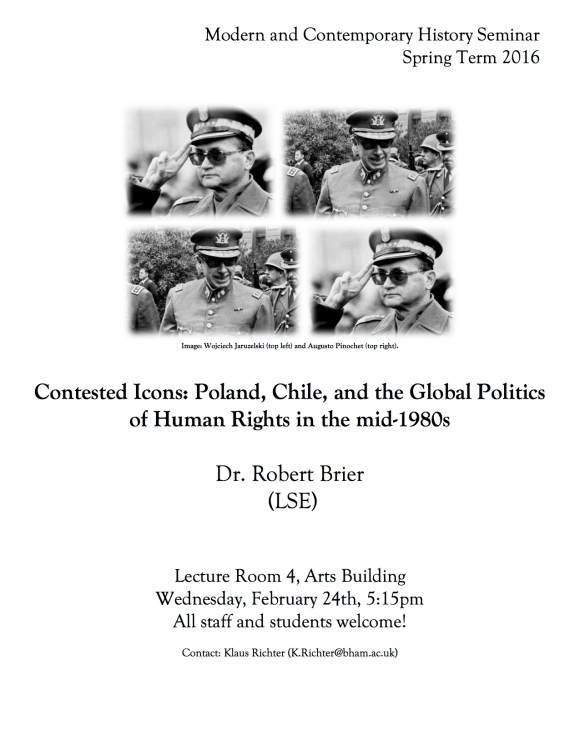 Abstract: In the course of the ‘human rights revolution’ of the late twentieth century, some cases of repression and resistance became icons of the struggle for individual rights—dissent in the Soviet bloc, opposition to Latin American military dictatorships, the fight against Apartheid. But why did these instances garner such broad international attention? An answer, this presentation argues, had not only to do with the degree of repression in those cases but also with how they resonated with the ideas and values of international supporters and with the latter’s attempts to shape the emergent global language of human rights. The presentation’s focus is on how two such iconic cases—the Polish Solidarity movement and the human rights movement in Chile—featured in different mid-1980s human rights discourses. Reconstructing debates held at the level of the UN, the Nobel Prize Committee or the international labor movement, the presentation will characterize Poland and Chile as “contested icons”—powerful symbols unto which various Western actors tried to project their competing understandings of human rights. But while the presentation shows how Poland and Chile became the subject of a global politics of human rights it will also demonstrate how Polish and Chilean activists skillfully used the moral authority of their movements to strike symbolic alliances and thus keep international attention focused on their countries. 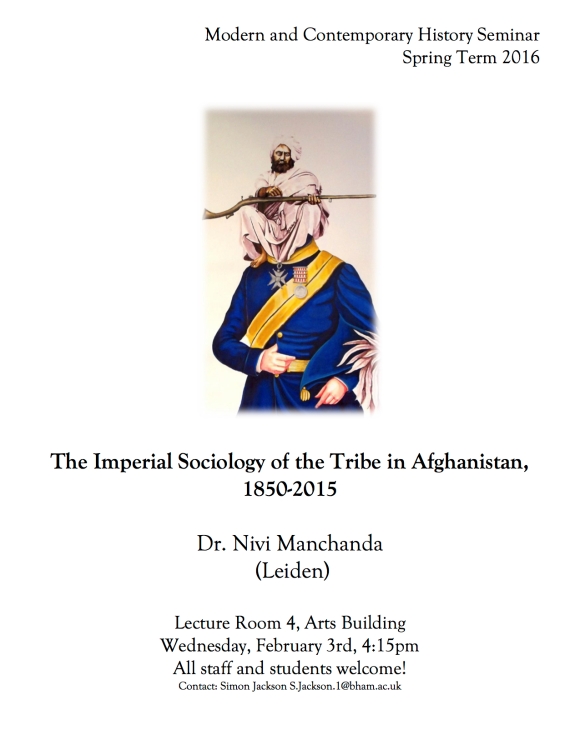 It will be delivered by:

All are welcome and there will be drinks afterwards!

This talk is part of seminar mini-series on “Nationalism, Identity and Community from Medieval Times to the Present”  jointly presented by The Birmingham Centre for the Study of the Middle Ages and the Centre for Modern and Contemporary History.

Abstract: The ‘tribe’ is a notion intimately related to the study of Afghanistan, used as a generic signifier for all things Afghan, it is through this notion that the co-constitution of coloniser and colonised is crystallised and foregrounded in Afghanistan. By tracing the way in which the term ‘tribe’ has been deployed in the Afghan context, the article performs two kinds of intellectual labour. First, by following the evolution of a concept from its use in the early nineteenth century to the literature on Afghanistan in the twenty-first century, wherein the ‘tribes’ seem to have acquired a newfound importance, it undertakes a genealogy or intellectual history of the term. The Afghan ‘tribes’ as an object of study, follow an interesting trajectory: initially likened to Scottish clans, they were soon seen as brave and loyal men but fundamentally different from their British interlocutors, to a ‘problem’ that needed to be managed and finally, as indispensable to a long-term “Afghan strategy”. And second, it endeavours to describe how that intellectual history is intimately connected to the exigencies of imperialism and the colonial politics of knowledge production.